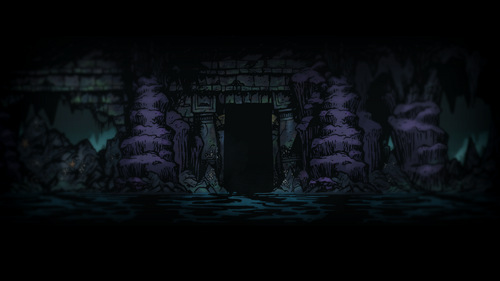 The Cove is the second to last dungeon that can be explored. It is a water-logged nightmare filled with pelagic horrors, once used by the Ancestor for unsavory deliveries - and unspeakable pacts.

The Ancestor once used the Cove as a means to deliver some of his more controversial artifacts, as well as a location to perform his pacts with the ancient beings in the water when money was scarce. The ancient fishmen that lived there were roused by the activity around their home, making it a habit to sink and kill any sailors that come near their domain, making them a threat to the marine shipments of provisions that the Hamlet relies on.

The music that plays during combat in the Cove is The Cove Battle.

Order of target elimination varies depending on the party's health and stress level. If the party is low on health, consider finishing Groupers first. If the party is reaching high stress, target back-row shamans. It is recommended to kill the Thrall as soon as possible no matter the circumstances, however. Leave maggots, stingers, and heavily armored enemies for last, as they are the least dangerous.

Bleed is less effective due to fish scales. Conversely, blight damage is extremely useful due to low resistances and the presence of high PROT enemies with the ability to guard weaker foes. Stun resistance is useful as many Cove enemies use stun attacks. Increasing the PROT value of frontline heroes can be invaluable here, due to high damage enemies and lack of DOT attacks. It's also worth noting that the Occultist does increased damage against eldritch enemies, which can be very useful here.