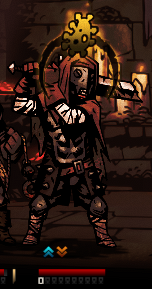 A Leper contracting a disease.

are negative conditions functionally similar to Quirks, that are sometimes contracted by heroes from enemy attacks, curios, traps, and occasionally at the end of a dungeon.

Most diseases are only harmful, giving significant penalties to any of a hero's stats, particularly Resists, MAX HP, and ACC. However some diseases also carry a positive buff, namely Rabies, which grants +15% DMG but -10 ACC.

Diseases last until removed. They can be cured in the Sanitarium for some gold (where there is a chance of multiple diseases being cured at once depending on upgrade level) or by using the camping skills from the Grave Robber or the Plague Doctor (which will cure all the diseases on the targeted hero). Additionally, the Flagellant

The Crimson Court DLC adds a new unique disease known as the Crimson Curse. Usually it can only be contracted by fighting Bloodsucker enemies, and it has several unique properties, such as conferring particular buffs and debuffs that change over time. Any character with the Curse cannot have any other diseases, and any disease they had will be removed upon acquiring the Curse.

Heroes' resistance to diseases is one of two resistances that isn't increased by Resolve Level, the other being Death Blow resistance.

The list of heroes by their disease resistance, from highest to lowest:

Attacks that can cause Diseases[edit | edit source]

Curios that can cause Diseases[edit | edit source]

The Carrion Eater, Thing From The Stars, and Crone have the only effects that increase Disease chance at higher levels.