The dungeon map is displayed in the game interface during expeditions. It features all the rooms in the dungeon together with the corridors connecting them.

Upon entering a dungeon, the position of all dungeon rooms is revealed. Every room has the same size and is connected to adjacent rooms by corridors split into four sections. Dungeons can be more or less intricate or linear depending on the location, while the overall size is determined by the length of the expedition. Corridors always lead to a room in both directions and never connect more than two rooms, being linear and having no corners. Corners and dead-ends always end in a room.

When entering a room or the sector of a corridor, its content is displayed on the map. It is also possible to explore parts of the dungeon ahead with varying degrees of precision by triggering a scouting event, which will reveal some or all the contents of nearby corridors and rooms on the map. As the party traverses the rooms and corridors, the map will show a 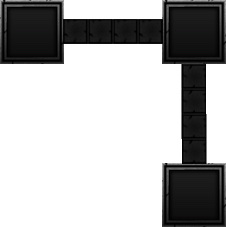 Corridors are represented by small, dark grey squares connecting rooms. Corridors can range from 1-8 sections in length, and traversing each section counts as a single round for the sake of calculating status effect duration and Light Meter depletion. Once explored, a corridor hall will change colour and icon in the map to represent its content; if emptied, a corridor square will be light grey.

Corridor sections can contain a variety of items:

Empty or unexplored sections of the corridors will be displayed like so:

Rooms are indicated by large grey squares at each end of any corridor. Like corridors, rooms can be scouted to reveal their content beforehand. The map can show:

Upon scouting, a room may acquire the icon of the respective content, or it may remain grey if it's empty. Differently from corridors, rooms cannot contain obstacles or traps, and cleared rooms cannot spawn further threats when re-entered, but fights from which the party has fled will restart.