Edit
watch 02:52
Roblox: DeepWoken - The Loop
Do you like this video?
Play Sound

Provisions are Items which can be bought from the Provision window before journeying into a dungeon. They can be consumed to obtain various benefits, including: to overcome obstacles, remove negative status effects, or obtain Loot. After finishing a dungeon and returning to the town, supplies are refunded at a greatly reduced price, so it's advised to carefully plan their usage before embarking on a travel.

Firewood and dog treats are an exception, as they can't be bought and will instead be automatically added to your inventory before embarkation.

Other means to obtain provisions are looting them during the mission or creating them using camping skills (the Grave Robber's Pilfer, or the Antiquarian's Resupply). Certain heroes bring 1 free provision before going into a dungeon; e.g. the Crusader always brings 1 Holy Water for free.

The Crimson Court (DLC) unlocks two another supplies: The Blood and The Cure.
These particular objects can be kept in the store after any quest. It's also possible to cumulate two of The Blood each week with The Sanguine Vintners District.

The Shieldbreaker (DLC) unlocks the Aegis Scale.
This object can only be dropped after Shieldbreaker's nightmares, or after hallway encounters with the snakes which can happen after completing all nightmares.

The following classes will bring free additional provisions on a mission:

Depending on the type of dungeon some of the provisions tend to be more useful than others. For example, there are no Curios or exclusive Enemies in the Ruins which will require the usage of an antivenom.

This is the provision window before starting a medium length mission with one firewood already in the inventory.

Do note, although completely visual, that the caretaker will appear as a Hallucination after certain events. 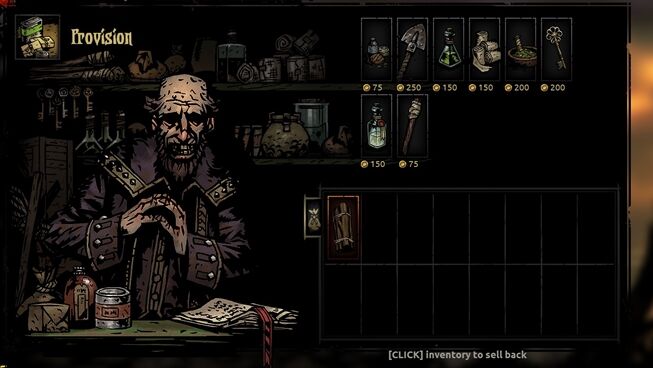