The faces of comedy and tragedy are used to symbolize quirks.

Quirks are peculiar traits possessed by heroes, gained through activities in the Hamlet or during expeditions. Quirks are semi-permanent modifiers that affect the hero in various ways, both positive and negative, either altering their stats or forcing particular behaviours. 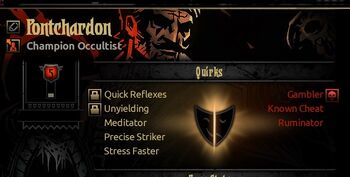 An Occultist having both the Gambler and Known Cheat quirks, effectively preventing him from benefiting from stress relief facilities until cured in the Sanitarium.

Heroes recruited from the Stage Coach will possess a random set of quirks - at least one positive and one negative.

Additional quirks, positive and negative, are gained during expeditions by interacting with curios, and after expeditions in the post-expedition screen. Quirks may also occur as a result of partaking in stress relief buildings in the Hamlet via the Tavern and Abbey.

A character can possess a maximum of ten quirks - five positive and five negative. After this, if a hero gains an additional quirk, a random existing quirk will be replaced, denoted by two spiralling arrows next to the new quirk (these arrows may be hovered over to see what quirk got replaced).

If a negative quirk is left untreated for long enough over the course of several expeditions, it also has a chance of becoming reinforced and locked in. Like reinforced positive quirks, these quirks will not be replaced when new quirks are earned.

All reinforced quirks may be removed at the Sanitarium, but at a much higher expense.

Several curios found in the dungeons will remove random negative quirks on the Hero interacting with the curio. The most reliable of these require the correct supply item to be used on the curio for the desired effect:

Whenever an expedition is completed, your surviving Heroes have a chance to gain negative or positive quirks, calculated as a percentage. Each hero's exiting amount of stress affects this percentage, though amounts above 100 are rounded down to 100.

Successfully completing a quest objective always results in a 45% chance of a positive quirk, regardless of stress.

Comparable Quirks are a pair of quirks, one negative and one positive, that alter the same state but in opposite ways. For example, Clumsy reduces a hero's DODGE by 5, while Evasive increases the hero's DODGE by the same amount. However, not all comparable quirks have even values. For example. Clotter increases a hero's Bleed Resist by 15%, whereas its counterpart Anemic reduces it only by 10%.

Independent Quirks have no comparable opposite, and thus are unique to themselves. Independent Positive Quirks mainly deal with area specific bonuses, camping and reducing gold costs in town.

These quirks affect which treatments a hero may use to relieve stress in the hamlet.

As with Positive Quirks, Negative Quirks have their own set that are independent with no positive counterpart.

There is another unique independent negative quirk called Shard Mercenary. It cannot be removed or gained, and is instead found on special mercenary heroes in the Stage Coach after the Endless Mode in the Farmstead is unlocked.

A subset of independent negative quirks. These quirks cause heroes to activate Curios without the player's consent. Each Quirk has a type of Curio that it has a chance to interact with. Also because Heroes will never use items with these interactions, they can easily hurt themselves or acquire diseases. Additionally, some quirks will cause the Hero to steal the items they loot, meaning that the player loses those items forever.

Not all Forced Interactions are based on Quirks. For a full list, look here.

As of the Radiant Update, heroes who survive against a new boss known as the Shrieker have a chance of acquiring new quirks unique to the quest. Both the positive and negative quirk are stronger than ordinary quirks.

In The Color of Madness DLC, heroes who survive against the new miniboss known as the Thing from the Stars may acquire new quirks that cannot be obtained elsewhere. These quirks are immensely potent, but are unique; they can only be on one hero in your whole roster. Only one hero will receive a quirk at the end of the mission, and gaining more requires defeating the Thing once again. They are automatically locked, and the Sanitarium will only offer the option to remove them. Removing Prismatic quirks allows them to be obtained again the next time the Thing is defeated. Prismatic Quirks will not count towards the limit of locked quirks on a Hero, so it's possible to have a Hero with three normal locked quirks and two Prismatic ones.

The quirks will be obtained in the order below:

When Skilled Gambler was originally released, it was accidentally programmed as a negative quirk.