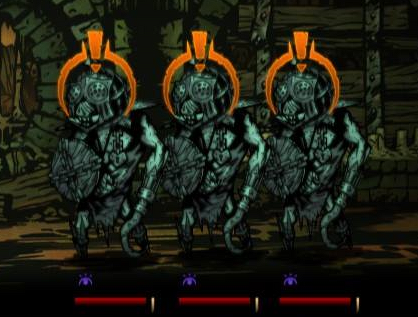 A group of Swine Gorers with Stealth.

Generally, the status effect is exhibited only by Enemies. The Grave Robber, however, has abilities that allow her to undergo stealth as well.

Enemy stealth is generally seen already applied on the enemy when a battle begins, and will last for two rounds before fading.

Characters with Stealth cannot be directly targeted for attacks, but may still be hit by attacks that hit multiple targets. However, such multi-target abilities must be targeting at least one non-Stealthed target. For example, the Gorers pictured to the right could not be targeted by the Highwayman's Grapeshot Blast as they all have Stealth applied.

Some Hero skills can bypass Stealth and ignore Stealth, allowing direct targeting of enemies using these skills. Certain Quirks and even Afflictions also allow the ignoring of Stealth entirely, allowing the Hero to target the Enemy normally. Many of these Stealth-bypassing skills also De-Stealth, which removes the Stealth status entirely.

Some enemies will begin battles with Stealth starting at the dungeon difficulty listed in the table:

In addition, the Plow Horse is seen to grant itself Stealth for one round by using the "Paw the Ground" ability, which it uses as preparation for "Trample".