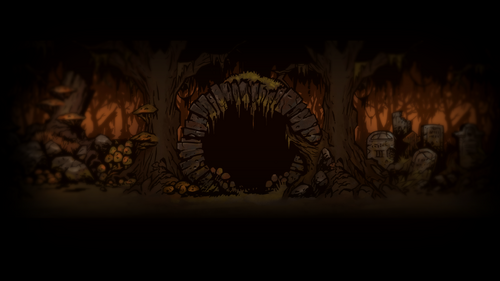 The Weald is the second dungeon that can be explored. The only roads to the Hamlet pass through these woods, making it an important area to cleanse.

The Weald plays host to a widespread and unnatural fungal infestation, and the fruits and victims of this spreading corruption are the primary dangers faced when exploring here. In addition, the Brigands make their home here, with a powerful cannon that protects them from their enemies.

The music that plays during combat in the Weald is Mournweald Encounter.

The Weald can be challenging without proper preparation. It presents a unique combination of threats that will often seek to overwhelm you in one particular way. The large creatures pack immense amounts of hit points and damage, the small creatures come in swarming numbers and sometimes with overwhelming speed and the everpresent infected fungi make Blight a continual threat.

As in other locations, back line creatures such as Fungal Artillery, Blighted Crones and the universal Cultist Witches are generally a priority, as they will apply stress, debuffs, and marks to your party. While not as prone to disease as the Warrens, Gnashers, Scratchers and Artillery all have a chance to infect your party - Gnashers in particular are a common source of Rabies. Ectoplasms and Gnashers are weak individually, but often appear in great numbers - Gnashers in particular are very fast, have a high dodge, and a high chance to inflict bleed, making them highly effective nuisances. Ectoplasms can duplicate themselves and coalesce into larger ectoplasms, potentially making for an endless fight if the player does not focus damage correctly. Unclean Giants deal tremendous amounts of damage while being very difficult to kill quickly due to their high HP - they can be managed effectively with high PROT or -DMG% debuffs, as they have a low Debuff resistance.

Fungal Scratchers are, comparitively, less threatening despite their high PROT and chance to Blight at higher levels, especially when they do not have allies to mark members of your party for extra damage.

Bleed, debuff, and move skills are all very effective here due to low enemy resistances, with blight being much less effective due to high resistances, though the Plague Doctor remains valuable here due to Battlefield Medicine's ability to cure both Blight and Bleed, both of which are common. The Unclean Giant deals a lot of damage with Treebranch Smackdown, so it is helpful to have an Occultist or Leper to lower his damage. The Hound Master can make good use of Target Whistle to deal with fungi.

The Weald has the most diverse enemy typing, with Unholy only being found in the occasional Bone Rabble and Ghoul. In apprentice level missions the most common enemy type is Eldritch, however veteran and champion missions add the Unclean Giant and Crone enemies, making Human the most common. The bosses of the Weald are also Human. Traps appear as a bed of mushrooms that deals Blight damage.